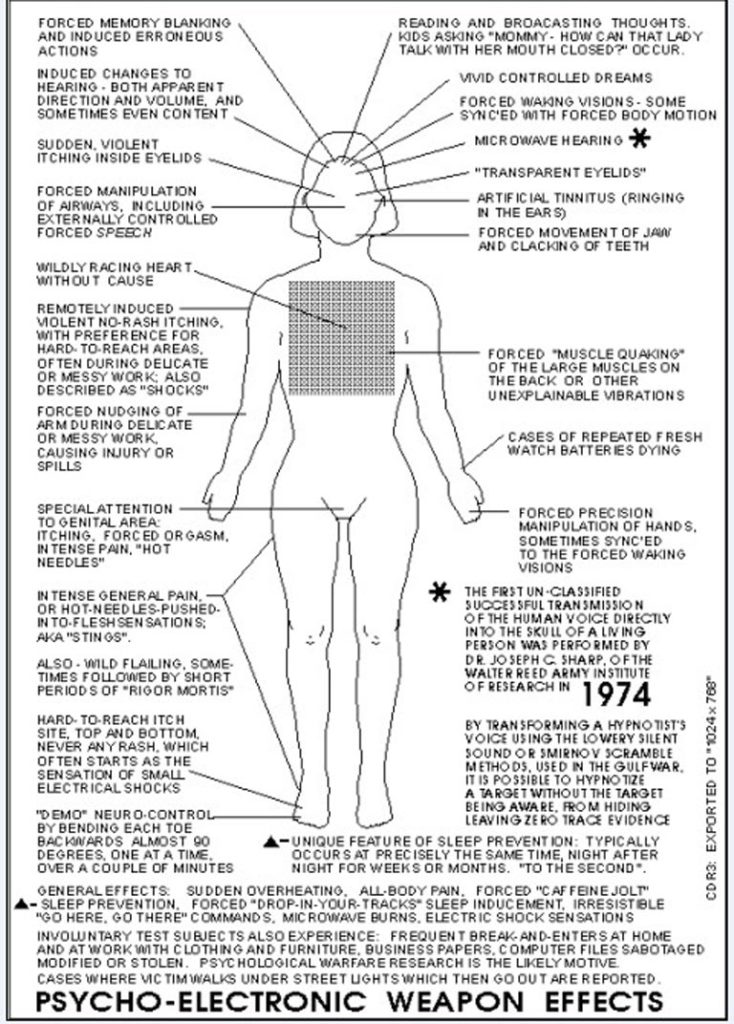 Induction “Entrapment” Phase Symptoms (1 month – 1 year):
-An initial reported sign of targeting is 3D sounds of neighbors or voices in areas nearby. These voices tend to be threatening of nature and often are used to induce sleep deprivation, which is a sensory deprivation torture technique.
-Insomnia. (usually impossible to cure via very powerful sedatives; Many resort to alcohol or hard drug use to cope, because they’re given unnecessarily)
-Feet Twitching. (similar to the very clinical and physician refuted syndrome Restless Leg Syndrome)
-Excessive Sweating. 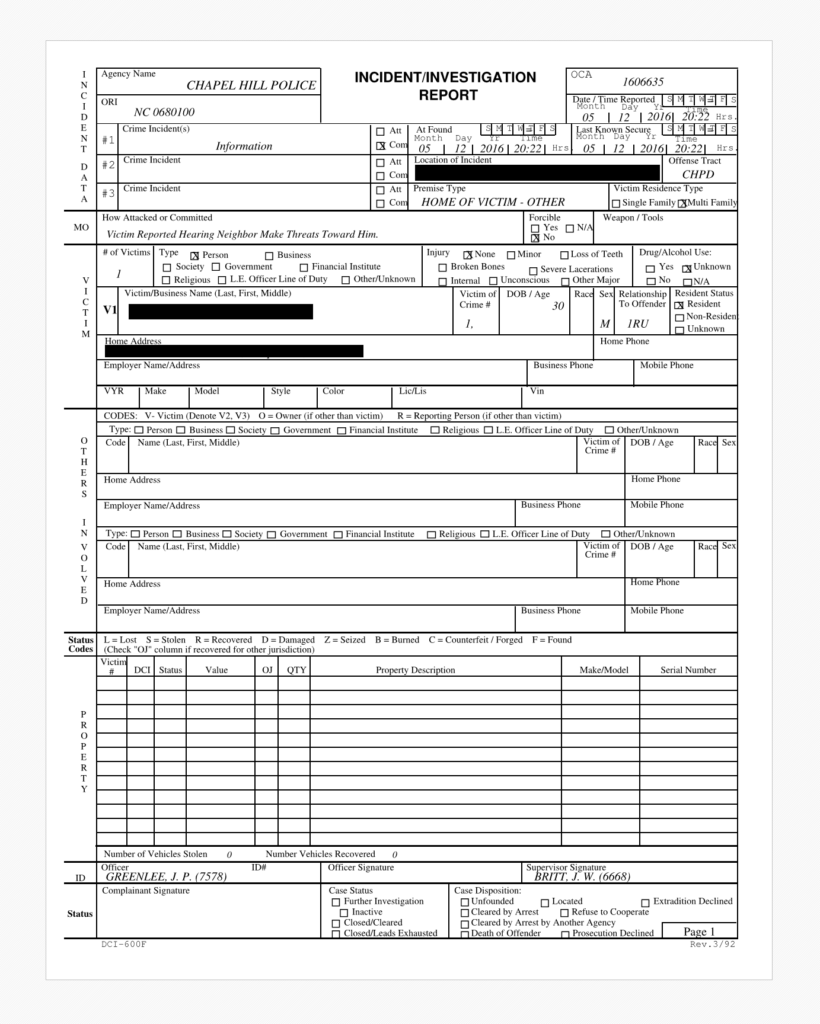 Disorientation “Voice-To-Skull (v2k)” Phase  (1 year – 3 years):
-Direct Voice to Skull. (Begins with commands to walk or drive around, many commands ordering Targeted Individuals to navigate to unknown places and/or commit illegal or unusual acts, drive in loops; look suspicious; DO NOT LISTEN TO THESE COMMMANDS; IMMEDIATEALY go to a safe location such as your home, apartment, or a nearby hotel; THESE COMMANDS ARE TRYING TO ENTRAP YOU into a jail cell or mental facility ( If pulled over or seen by police: “Sir….I’m hearing the FBI saying that I need to drive to this location.” This will land you into police custody, who will not believe what you say is happening. If you are apprehended, refuse to discuss what is occurring and call or seek an attorney; If speaking with an attorney, discuss what is written on this website and let them know that you believe you are targeted; a hired or public attorney will listen to you and not try to land you in jail or a mental facility.)

Pain & Suffering Psychological and Physical Torture “Cover-up (Eugenics)” Phase (3 years – Indefinite):
-Direct and constant voice to skull brainwashing. (“This is CIA. This is the NSA. This is Russian hackers.” Constant attempted sensory-overload CIA torture methods, especially when trying to fall asleep. The purpose of this is to make you feel frustrated, act out, and tell law enforcement officers that the NSA/CIA is brainwashing you. No ordinary officer or  Federal agent will believe you. They want to use your testimony as proof that you are mentally ill or adjudicated to a judge, to make you end up in a mental facility or prison. DO NOT OBEY ANY COMMANDS. ABSTAIN FROM LEGAL AND ILLEGAL DRUGS, AS THEY USE SUBSTANCE ABUSE OR ADDICTION AS AN ALIBI, SO YOUR FAMILY, FRIENDS, AND CO-WORKERS BELIEVE YOU ARE DELUSIONAL OR “SUFFERING FROM DRUG INDUCED PSYCHOSIS”. If you are given anti-psychotics and don’t respond, even against your will, you are most likely being targeted. They want to silence you and pretend they don’t engage in warfare programs with ordinary citizens within their own country. The CIA formerly used psychedelics to brainwash and silence innocent citizens via MK-ULTRA. This is a relatively new MK-ULTRA 2k (10-20 years) program the CIA uses to make it appear as if you are mentally-ill from a social-psychological perspective, though physically there are bio-marker tests for psychosis such as a EEG/MRI. If you are not mentally ill you should not have a EEG or MRI relative to those scans of those who suffer from actual psychotic disorders such as schizo-typical disorders like schizophrenia or bipolar disorder. Another technique is testing for brain damage from radio-waves via a full-body CT Scan or Heat shock proteins (HSP) blood test, which would exhibit proof of an unknown source of the heating of human proteins, especially the brain.

Many targeted individuals believe in an impossible amount of Psychology Community conspiracy; There’s no way such a conspiracy could be implemented without a Whistleblower coming forward after so many years of this Targeting program implemented. The Psychology Community is naïve and empirical only in the sense of a false-belief in Pharmacology, especially when spoken with about unknown or government used technologies in general. It’s been proven and shown that the government has unlimited black budgets to create ground-breaking technologies before any private corporation. They are only believers in medicine as a cure for mental illness. Many are paid well and work for the government, thus would never believe in a government brainwashing program via CIA.

DEW (Directed Energy Weapon attacks via Satellite Weapons built by Defense Contractors such as Raytheon, Boeing, Northrop Grumman, or Stratfor)
– Directed Shock Strikes on the skin, muscles, or organs of the human body, including the brain. -Brain Burn, which is a burning sensation all over the areas of the brain.
-Thermal rays, which are sudden feelings of warmth and temperature increase, sometimes followed immediately by sweating.
-Vertigo strikes, which cause a quick and strange feeling of dizziness and disorientation of balance.
-Large or Small Muscle spasms.
-Stroke-like sensations of the temples near each eye.
-Single pin burning sensation.
-Finger and/or hand twitches, usually resulting in a held object being dropped.
– Sudden and extreme tinnitus of the ear, sometimes with a ringing noise.
-Clicking of teeth randomly, sometimes resulting in biting of ones tongue.
-Feelings of Sexual Assault of the Genitals or Erogenous zones (Remote Rape, which is tingling sensations of the genitals, such as the testicles of a male and non brain-induced erections or the labia & clitoris of female).
-Remote Waterboarding Techniques (such as choking on fluids that were previously drank while in an upright position or while asleep; Recommended sleep for Targeted Individuals is sleeping on their side, to avoid aspiration that can “silently kill” Targeted Individuals).