The Freedom of Information Act (FOIA), 5 U.S.C. § 552, is a federal freedom of information law that allows for the full or partial disclosure of previously unreleased information and documents controlled by the United States government.

We have filed several separate FOIA requests to certain govenment agencies asking for “Any documents which pertain to Directed Energy Weapons being tested or used on any United States Citizens”. Below is the current collection of FOIA responses we have received. 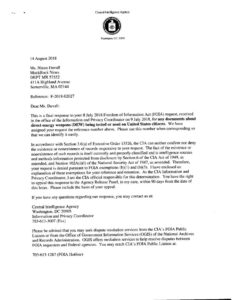 Above is a link to the rejected response letter from the CIA for the FOIA request that was filed. The rejection states “In accordance with section 3.6(a) of Executive Order 13526, the CIA can neither confirm nor deny the existence or nonexistence of records responsive to your request. The fact of the existence or nonexistence of such records is itself currently and properly classified and is intellegence sources and methods information protected from disclosure by Section 6 of the CIA act of 1949, as amended, and Section 102A(i) (1) of the National Security Act of 1947, as amended.”

This basically means the CIA cannot disclose such records due to secrecy of the information. Though the CIA has a 9.89% success rate of “Completed” on Muckrock, the recent release of documents related to MKULTRA proves that inevitably classified documents can eventually be released to the public. I’m going to file an appeal, but am not optimistic about the response. I’m going to place the CIA at the top of the websites FOIA request as a suspected agency behind targeting.

The similarity of mind control, behavior modification, testing on random citizens/military members, etc. of the previous CIA project MKULTRA makes me suspicious that targeting could be a continuation of this project under a different name. I soon am going to file many FOIA requests to various military groups, some of which appear to be behind the creation of the technologies for targeting individuals. It might be possibly that the CIA is collaborating with the military to target individuals, since both groups have a close relationship and actively work together still to this day. All Directed Energy Weapons and voice-to-skull technologies are created by  the Air Force Research Laboratory and DARPA, therefore the US military has much involvement in Targeting Individuals.

Update: Below is the appeal of the FOIA Rejection.

“My appeal is based upon the CIA’s discontinued Project MKUltra, which main objectives were behavior modification and mind control through the testing of psychedelic drugs, hypnosis, and sensory deprivation upon innocent civilians. The American public’s renewed interests in the MKUltra program from the dissemination of FOIA requested documents and the Cuba/China sonic weapon attacks, should render this rejection applicable under the general safety of United States civillians. This FOIA rejection should be invalid under subsubsection’s 1 and 2 of the section 1.7 of the Executive Order 13526.

Below is the mentioned full text section of Executive Order 13526:

Sec. 1.7. (Executive Order 13526) Classification Prohibitions and Limitations.
(a) In no case shall information be classified, continue to be maintained as classified, or fail to be declassified in order to:
(1) conceal violations of law, inefficiency, or administrative error;
(2) prevent embarrassment to a person, organization, or agency;
(3) restrain competition; or
(4) prevent or delay the release of information that does not require protection in the interest of the national security.

This FOIA rejection appears to be rejected upon the violation of subsubsection’s 1 and 2 of the section 1.7 of the Executive Order 13526. A rejection of this FOIA request according to these subsections appears to be only for the purpose of preventing the dissemination of documents that would provide proof of violations of United States Federal laws, and to prevent embarrassment of the CIA for violations of Federal laws and this FOIA request.”

This appeal was denied on the grounds that “Your appeal has not been accepted because you failed to state any valid reason(s) for appeal as allowed by the Freedom of Information Act statute.” 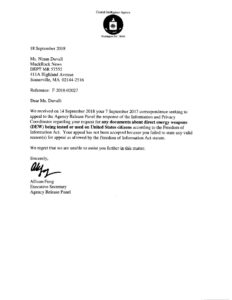 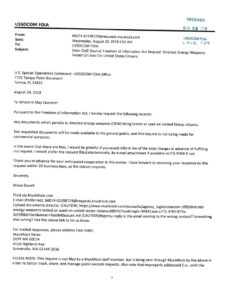 I was later given a final FOIA response “Please be advised that the information you are requesting does not fall under the purview of therefore, no records responsive to your request were located. I have appealed this decision on the grounds that such public documentation can be found directly from USSOCOM websites and PDF documents. 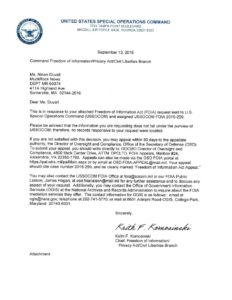 Above is the FOIA response we received back from the NSA for the FOIA (Freedom of Information Act) request we had filed. The NSA rejected our request about whether Directed Energy Weapons (DEW) are being tested or used on any United States citizens. The grounds for the rejection is that the request is outside of the scope of the NSA’s mission of Signals Intelligence or Information Assurance. The keyword of the document is “foreign”, but the document does not contain the word “domestic” whatsoever. The Snowden leaks proved that the NSA has been conducting domestic surveillance programs extensively for many years. Though I believe that the NSA does not test or use Directed Energy Weapons, or any weapons for that matter, I find it very concerning that the FOIA response had no mention of any domestic spying programs.